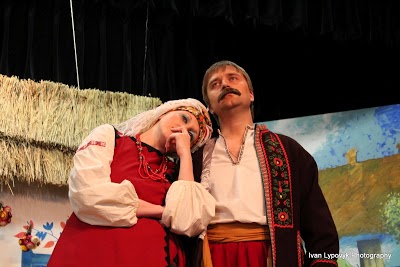 For a long time thinking how to please the audience after an inflammatory Mexican Malanka in January, actors Ukrainian Drama Theatre “Constellation” decided to contact the Ukrainian classics. Therefore, on April 21 at the Ukrainian National Federation (UNF), a premiere Stephen Vasilchenko “At first bumps.” The play began when Paschal adoption of the UNF Division in Edmonton.

The idea is to put this play occurred in the director of “Constellation”, Ioannina Vyhovsky that after much thought and views excerpts Ukrainian plays, came across a video clip of 5-th channel, the drama school “mess” and their interpretation of the play in order Polissya .
Prepared to play about three months thinking the role, costumes, scenery and music.Actors play was only 5 main actors, and about 10 secondary actors. Starring in the play played: Seh Marianne (Lena-girl that parents are not allowed on the evenings), Maxim Beznoschenko (Savka-stubborn father of Helen, who by the end of play does not allow his daughter divuvaty), Ioannina Vygovska (Vasilisa the mother Helena, who seem toagainst that daughter divuvala, but leaves the last word of her husband), Vitaly Storozhuk (Tymish-inflammatory guy on the ears in love with Helen) and Sergei Shevtsov (Santa Savaryn-old representative of the generation that remembers with regret his parubkuvannya). So what is this show? Nothing new and incredible, but rather as an old world theme: the conflict between parents and children. It is interesting, but the actual show and now! As called Marianne Seh during one of the rehearsals: “It’s istortya my life and my own virginity, even play did not need, just remember how everything was ….”.
It should be noted that the performance took place at Easter adoption UNF where univtsi with their families, along with guests home first polasuvaly very-tasty meal of Paschal Marusin Kitchen under the direction of Mrs. Mary Goshko and her assistant, and later nalashtuvalys to watch performances. Has started a simple action game in Ukrainian accompanied by a stream of modern Ukrainian songs of spring, where girls and boys dressed in Ukrainian array playfully discussed in February Savka uncle, who is still his daughter Elena will not allow the street to walk. Girls and boys were: Andrew Andriyechko, Theodore Buryachok, Roman Kobyletska, Tanya Sagittarius, Sophia and Alexander Semenko John Lypovyk and Natalia Boiko. Immediately thereafter began a dialogue between a girl Elena and her parents were more clever jokes, loud quarrels and interesting ending. A great folk singing viewers impressed Natalia Boiko. Extraordinary music and sound prepared Vorotylenko John and Mary was engaged in design programmki Vorotylenko. Chairman of the UNF in Edmonton, Mr. George Yopyk helped with decorations and processing facilities. It should be noted that immediately after the performance there had the opportunity to participate in the drawing of flowers used in decorations. Pots of flowers bought in the organization “Fred’s Flower Greenhouse”, that Morenvili recommended by the owner, Lydia Savchuk.
Here on this fun nottsi ended a wonderful evening that brought together in one room over a hundred people. In the case of the “Constellation” will begin to prepare for “Humoryna 2012”, which is planned for early September this year.
View video shows you the test website of UNF at Internet: www.unf-uno.hatka.org.ua